Recent advances in endoscopic surgical techniques and the increased sophistication of surgical instruments have offered new operative methods and techniques for the gynecologic surgeon. Currently, laparoscopy is perceived as a minimally invasive surgical technique that both provides a panoramic & magnified view of the pelvic organs and allows surgery at the time of diagnosis. Laparoscopy has become an integral part of gynecologic surgery for the diagnosis and treatment of abdominal and pelvic disorders of the female reproductive organs. Endoscopic reproductive surgery intended to improve fertility may include surgery on the uterus, ovaries, pelvic peritoneum, and the Fallopian tubes.
Laparoscopic tubal surgery
A variety of procedures is collectively known as fertility enhancing tubal surgeries;
1. Salpingo-ovariolysisis division of adhesions involving Fallopian tube and ovary;
2. Salpingostomyis the refashioning of a distal tubal ostium for distal tubal occlusion and is designed to keep the Fallopian tube open;
3. Tubal reanastomosis is the rejoining of Fallopian tubes typically performed for reversal of sterilization;
4. Cornual anastomosis and utero-tubal implantation are recognized surgical treatments for corneal occlusion.

All these procedures can be easily and effectively performed by laparoscopic surgery. The removal of filmy adhesions is associated with improved chances of pregnancy. Laparoscopic adhesiolysis still remains a useful and effective procedure for infertile couples with pelvic adhesions. Salpingo-ovariolysis as a fertility-enhancing procedure is done by separating peri-adnexal adhesions with laparoscopic scissors, electrocautery.
Hydrosalpinx is a chronic pathological condition of the Fallopian tube, and is a major cause of infertility. In most patients, the fimbriated end of the tube adjacent to the ovary is occluded and the distal half of the tube is distended with fluid. The main causes of hydrosalpinx are pelvic inflammatory disease, ectopic pregnancy, previous abdominal operations, and a history of peritonitis and tuberculosis. Distal occlusion may also result from endometriosis. The presence of hydrosalpinx can be diagnosed by hysterosalpingogram or by laparoscopy with or without Chromopertubation. Laparoscopy provides both the certain diagnosis and the treatment of hydrosalpinx at the same session
In addition to improving overall pregnancy rates by removal of the diseased tubes, it has been suggested that treatment decreases the rate of miscarriage compared with those with untreated hydrosalpinges.
Tubal preservation surgery for distal tubal lesions includes Salpingostomy and fimbrioplasty.
Fimbrioscopy and salpingoscopy are the procedures that can be performed to ascertain the quality of the fimbriae, endosalpinx and the prognosis for future fertility.
Indications for tubal anastomosis include reversal of sterilization, mid tubal block secondary to pathology, tubal occlusion from ectopic pregnancy, and salpingitis isthmica nodosa. The goal is to remove abnormal tissue and reapproximate the healthy tubal segments with as little adhesion formation as possible.

Laparoscopic myomectomy
Uterine fibroids are the most common tumor of the female reproductive tract and affect 30-40% of reproductive-age women. Fibroids can be the sole cause of infertility; fibroids are linked to fetal wastage and premature delivery. Several elements indicate that fibroids are responsible for infertility. Medically treated fibroids tend to grow back or recur, so most fibroids that cause symptoms are managed surgically. Depending on their number and their location, fibroids with mostly intra-cavitary development are dealt with by hysteroscopy. Fibroids which are inside the musculature of the uterus or on the outer side of the uterus are operated and removed by laparoscopy. As fertility preservation is one of the primary goals of myomectomy, the marked reduction of adhesion formation by laparoscopic myomectomy gives it a distinct advantage over laparotomy.

Laparoscopic surgery for endometriosis Endometriosis is a complex disease with typical and atypical morphology . Endometriosis can be as small as a single 1-mm peritoneal implant to 10-cm or larger endometriomas with cul-de-sac obliteration. Endometriosis is frequently associated with infertility. 30% to 70% of infertile women have been reported to have endometriosis.
Laparoscopy can be considered to be the best surgical approach for diagnosis and surgical management of ovarian endometriotic cysts. The goal of treating of peritoneal endometriosis is to destroy the implants in the most effective and the least traumatic way to minimize the formation of postoperative adhesions. Mainly, there are two different surgical techniques to treat the endometriomas:
(i) cystectomy with excision of the endometriotic cyst;
(ii) Drainage/ aspiration of the cyst content and ablation of the cyst capsule with electro coagulation.
If a lady is having chocolate cyst/ endometriotic cyst, usually it is very difficult to remove it intact (Because of the inflammation and adhesions of the cyst with the ovary and surrounding structures). During surgery it generally ruptures or we intentionally open it and drain it. We Strip off the capsule of the cyst, leaving behind normal ovary. After the capsule is stripped from the ovary, the base is cauterized to seal tiny blood vessels and help ensure that the entire endometriomas has been removed. Draining endometriomas or partially removing its wall is inadequate because the cyst lining remains functional leading to reoccurrence of the symptoms.
If possible sutures should not be used since they can cause adhesion formation. However, when necessary, suture is placed within ovarian stroma, and the knot is tied inside the ovary, to minimize adhesion formation.
Laparoscopic diagnosis and treatment of endometriosis will be useful in increasing the probability of conception either spontaneously or with IVF treatment. This should be also valid for patients with multiple IVF failures.

Fertility enhancing hysteroscopic surgeries
Intrauterine pathologies are found to be present in 25% of infertile patients. Structural abnormalities of the uterine endometrial cavity may affect the reproductive outcome adversely, by interfering with implantation or causing spontaneous abortion. Therefore, exclusion of any intrauterine pathology becomes an important step in infertility work-up. Intrauterine abnormalities may be visualized using variety of techniques, including Hysterosalpingography (HSG), transvaginal sonography (TVS), sonohysterography (SHG), and hysteroscopy.

Endometrial Polyps
Visual inspection of uterine cavity provided by the hysteroscope offers an excellent method for the removal of polyps, particularly pedunculated polyps, which can be transected and removed in their totality. The resectoscope is particularly useful for removing sessile polyps as the base can easily be resected to avoid recurrence.

Sub mucous fibroid
When a fibroid is pedunculated, transection of the pedicle can be accomplished with mechanical hysteroscopic scissors. Sessile sub mucous fibroids benefits most from resectoscopic shaving of the fibroid, which causes the uterus to contract so that the fibroid that is intramural becomes intraluminal, allowing its complete removal. Sub mucosal and intramural fibroids interfere with fertility. Women treated by hysteroscopic myomectomy for submucosal fibroids might have similar reproductive outcomes as infertile women with normal uterine cavities. Surgical removal of large intramural fibroids prior to IVF treatment might increase the likelihood of a successful reproductive outcome.

Uterine septa
Uterus may have a septum in its centre, which may be complete (Dividing cavity of the uterus in two halves) or partial. Intra uterine septum may be associated with recurrent abortions. Hysteroscopy is used to divide the septum trans-cervically under direct vision. In general, hysteroscopic scissors are sufficient to divide thin septa. For broad septa, the resectoscope fitted with a thin cutting electrode is useful.

Tubal Ostia
Tubal ostium is an internal opening of fallopian tube into the uterus. The first 2-3 mm into the tubal ostia can be evaluated by hysteroscopy. Hysteroscopic evaluation of the intramural Fallopian tubes provides an opportunity to diagnose and treat polyps and adhesions obstructing or distorting the tubal ostia. Direct ostial cannulation allows the selective assessment of tubal patency. Hysteroscopic tubal occlusion may be also an option for the management of hydrosalpinx before IVF when salpingectomy or laparoscopy is contraindicated. e.

Cervical canal
Hysteroscopy is of value in exploring the cervical canal in patients who have had repeated abortions. Visual appraisal of the cervical canal during hysteroscopic examination reveals that, in many of these patients, there is a loss of the sphincter-like action of the internal cervical os. Uterine anomalies can also be detected. 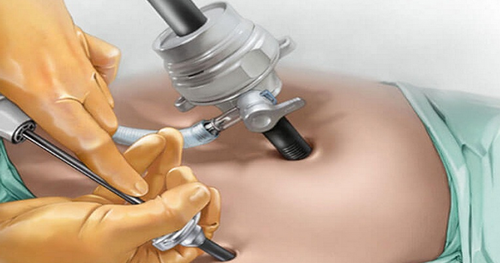