Female genital system consists of uterus, Fallopian tubes on either side of the uterus and two ovaries situated just by the side of fallopian tubes. Uterus or womb is a hollow muscular organ of the female reproductive system that is responsible for the development of the embryo and fetus during pregnancy. Fallopian tubes are the hollow tubular structures attached to either side of the uterus which perform key role in transport of eggs sperms and embryo during fertilization event.

Ovaries are the structures which are situated near the outer end of fallopian tubes. Ovaries are the main reproductive organ which produces eggs. Women are born with their lifetime supply of eggs within the ovaries. When the girl is small (say less than age of puberty) the brain is not secreting hormones and ovaries are inert and nonfunctioning. As the puberty is reached, the brain starts secreting hormone responsible for the growth of the egg inside the ovary. This hormone is FSH.Once FSH is secreted by the brain it acts on the ovary and ovary starts forming eggs. Once egg is mature (usually on 12 to 14th day of cycle) the brain secretes another hormone called luteinizing hormone (L.H.). Under effect of the L.H. the eggs are released / ruptured from the ovary ready to be picked up by fallopian tube. When the egg is growing in the ovary, it produces hormone estrogen.

Abnormal function of the ovary leading to none or abnormal development and release of the eggs is the most common type of ovarian factor infertility and it accounts for around 20-30% of infertility patients.
Ovulation may occur irregularly (oligoovulation) or not at all (anovulation). The ovulatory process is under the control of numerous interrelated hormones. Abnormal function of the ovary can be caused by numerous factors including stress, pituitary disorders, obesity, anorexia, polycystic ovarian disease, disorders of the adrenal or thyroid glands, elevated levels of Prolactin, and others.
To know various causes, hormonal status of the patient, we order the appropriate tests to determine the cause of anovulation prior to treatment. Many times tablets are given to stimulate ovulation. Studies clearly suggest that there is little chance of conception beyond three cycles of tablets. Injectable FSH is used in stimulated IUI and in assisted reproductive technology cycles (IVF). FSH directly stimulates the ovaries and causes the production of numerous eggs.

A condition termed hyperprolactinemia (elevated prolactin levels) can lead to absent or no formation of eggs, that is often accompanied by breast milk production. Prolactin levels normally rise during pregnancy to stimulate breast milk production. This condition is usually caused by a small tumor located at the base of the pituitary gland. It can often be treated with medication (cabergolin, bromocriptine) or the tumor is surgically removed. Polycystic ovarian syndrome (PCOS) is a cause of anovulation and is accompanied by elevated androgen (male hormones) levels. Women with PCOS typically have excess body hair and a classic “pear shaped” body appearance. The syndrome is evidenced by the production of numerous small cysts on the ovaries. Some tablets like clomiphene/ letrozole are sometimes used to induce ovulation along with supportive treatment and diet and exercise.

As a woman approaches menopause, her eggs loose there capacity to develop and fertilize. The period preceding menopause is termed the peri-menopause and is evidenced by irregular ovulation.
Ovarian reserve is a measure of a women’s ability to produce viable eggs as indicated by AMH level.
Less the AMH, lesser is the ovarian reserve and the fertility potential of the lady. Premature ovarian failure is the inability to produce viable eggs at young age. When viable eggs cannot be produced and ovulated the best hope for a couple to create a genetically related child is to use donor eggs. 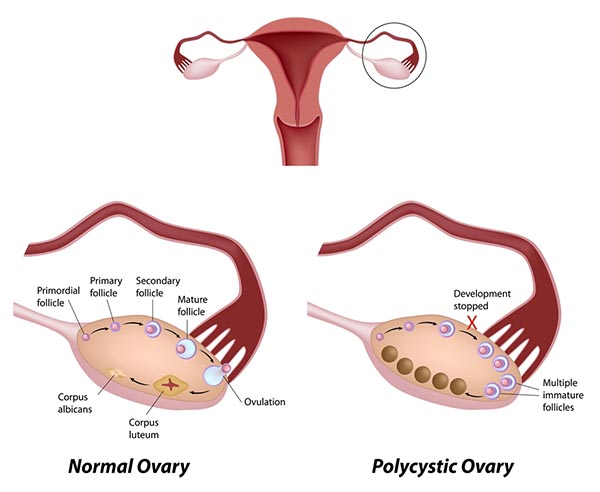